A Celebration of Slothfulness

A Celebration of Slothfulness

Ah, slothfulness.
Lazing about doing nothing useful.
Nothing like it.

Some good folks published an entire dictionary about it in 2011. Sloth - A Dictionary for the Lazy, is a part of Adams Media’s The Deadly Dictionaries series. This particular volume defines 154 pages worth of lazy-related words, interspersed with sloth-related quotations. Here are some highlights:

aposiopesis – noun – (1570s) the state one is in when one stops speaking mid-sentence, either due to the inability to finish the thought, or sheer stubbornness.

fainéant – noun – (1610) a lazy person or slacker. Also an adjective to describe such a person.

somniferous – adjective – (1600) having the ability to cause sleepiness.

sponger – noun – (1670s) one who allows others to provide all his/her needs, a freeloader.

troglodyte – noun – (1550s) though this term was originally used to label prehistoric cave-dweller, it is now used pejoratively toward an uncouth, unmannered, or unmotivated individual.

wastrel – noun – (1847) an insulting word used to label a person who is wasteful or lazy.

weltschmerz – noun – (1875) the state of being world-weary, pessimistic or apathetic.

Followers, what slothful words do you appreciate?

My thanks go out to this week’s sources the OED, Sloth – A Dictionary for the Lazy, & Etymonline,
Posted by CS Perryess at 5:51 PM 4 comments:

This Sunday, June 23, is Public Service Day. Sponsored & established by the United Nations in 2003, June 23 is a day to celebrate & acknowledge the good deeds & good spirit of public service worldwide.

Public showed up in English in the 1300s as an adjective through Old French from the Latin word publicus, meaning of the state, of the people, general, ordinary, or vulgar (oops – someone’s elitism is showing). By the 1600s public was also being used as a noun, meaning commonwealth, or public property. It is related to the words people, populace, popular, publicity, publican, puberty, & pub. Its medieval English synonym, folclic, sadly, never made it out of the Middle Ages.

The word public first aligned itself with the word service in 1893, giving us public service.

Service also came through Old French from Latin, though it appeared in English two centuries before public. The Latin donor word was servitium, which meant slavery or servitude, and came directly from the Latin word for slave, servus. Within a century, service’s meaning had generalized to simply mean the act of serving (not necessarily due to enslavement). By the late 1400s tea service was born and by the 1500s service picked up its military meaning. In 1941 service & industry found one another & service industry was born.

But back to the UN & June 23.
What sort of public service can we each provide?
Moving a grocery cart so it won’t whack into someone’s car?
Recommending a great book?
Offering a hand to someone who could use it?
Contributing time or resources to a social or environmental cause?

Maybe afterward we could all meet somewhere where we can enjoy being served – like maybe the pub.

My thanks go out to this week’s sources the OED, United Nations, & Etymonline,
Posted by CS Perryess at 9:04 PM 2 comments:

I’ve always been fond of the word ilk. It’s just far enough outside the everyday words of my suburban American life that hearing it sparks that unexpected thrill of baklava or pointilism or mariachi music – just rare enough to make me smile.

In Old English, ilk was spelled ilca & meant same. It could be used as both a noun & adjective. It came from the Proto-Germanic word, ij-lik, which also spawned the recently beleaguered word, like.

I’ll admit it, I am among those annoying teachers & adults who frown upon the use of the word like as a filler:
Like, the word ilk just makes me smile.

It also curdles my cheese when like is used as a discourse particle:
I’m like, “Dude, I love the word ilk.”

Though many assume that Moon Unit Zappa & all those Valley Girls are responsible for both twisted usages, the discourse particle usage predates Moon Unit’s birth (probably some time in the early 1950s) & the first written instance of like as a filler appeared in1886 in Kidnapped by Robert Louis Stevenson:
“’What’s like wrong with him?’ said she at last.”
Heavy sigh.

Interestingly, some other earlier forms of the adjective like didn’t make it to the modern vernacular, but instead, faded out in the 1700s. Consider the words liker & likest:

The moon is liker the earth than the sun.
Osbaldo is the person likest me in my family.

My wonderful 1959 Webster’s new World Dictionary suggests that like can function as all these parts of speech, though I find the asterisked ones hard to swallow:

an adjective –
After Garcon’s outburst, Consuela responded in like manner.

an adverb -
Due to his old Anglo-Saxon work ethic, Yalmer works like mad.

a conjunction* -
It was just like Ludwiga said, Terence simply had no sense.

and as a suffix -
When he pouts like that, Umberto can be so childlike.

Dear followers, what do you have to say about the usage (or misusage) of like, or about the sheer beauty of ilk?

My thanks go out to this week’s sources the OED, The Hot Word, Denise Winterman’s BBC article, & Etymonline,
Posted by CS Perryess at 8:11 PM 4 comments: 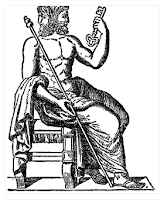 Don’t you love those words that can mean exactly the opposite of what they mean? They’ve been called many names over the years, though none of those names have really stuck: contranyms, antilogies, eniantodromes, and Janus words. I’m fond of that final one, which refers to the two-faced Roman god of transitions, Janus.

A few of my favorite Janus words:

Fast: either something can hold fast, or it can move fast.

Strike: either I can strike the ball or miss the ball & strike out.

Garnish: either a garnish is something added, like parsley on one’s dinner plate, or something subtracted, as in garnished wages.

Citation: I can receive a citation of merit for some good deed, or a traffic citation for a deed of vehicular repute.

Bill: either one receives a bill for what one owes, or one can be paid in bills when one is owed.

Host: I can be helpful by hosting a website or hosting a party, or I can cross to the dark side and host a disease.

Oversight: I can be in charge of the oversight of employees, or I can ignore my responsibilities & be guilty of oversight.

Swipe: I can do what the society honors and swipe my credit card, or I can do what society abhors & swipe something off the shelf.

Dear followers, what other Janus words would you add to the list?

My thanks go out to this week’s sources the OED, Fun With Words & Etymonline,
Janus image source
Posted by CS Perryess at 7:42 PM 3 comments: