Gwen Dandridge’s middle grade novel, The Stone Lions just showed up on the digital bookshelf – true cause for celebration. 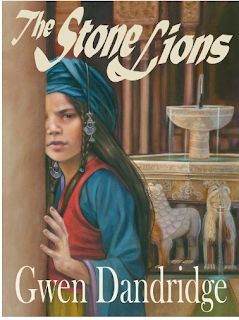 In this tale of intrigue and mathemagic, the reader joins Ara and Layla, to rush through the stunning and glorious Alhambra, in all its early-Renaissance glory. Our two heroines search for various types of symmetry in the Alhambra’s miraculous tilework, as they strive to keep the Alhambra – and the thriving Islamic life & culture it represents – alive.

Following are etymologies for some of the words that play important roles in the tale:

The story takes place in the Alhambra, a stunning Moorish castle. Alhambra means red palace, and comes from Arabic, al hamra, which refers to the glowing red bricks of its exterior.
The stone lions of the title are the centerpiece of the Alhambra’s Court of the Lions - a fountain surrounded by twelve stone lions. Lion entered English in the 1200s from Old French, where the word meant not only lion, but hero. The French borrowed the word from Latin (leonem), which borrowed it from Greek (leon), which appears to have borrowed it from a Semitic language (most likely the Hebrew word labhi). Some of the meanings lion has held during its long life as an English word include:

-one who is fiercely brave,
-tyrannical leader, &
-greedy devourer.

The idiom the lion’s share entered English in 1701. The word lionize initially meant person of note who is much sought after, a macabre reference to the lions kept in the Tower of London, though over a dozen decades it came to mean to treat someone as a celebrity. It takes little to imagine that what with paparazzi and all, our modern celebrities may feel the teeth of the earlier meaning.
The Alhambra is located in southern Spain in the city of Granada, which most likely came from the Latin, granatum, which translates to seeded apple, or pomegranate.
Symmetry made its way to English in the 1560s through Latin, from the Greek word symmetros, meaning having a common measure, even or proportionate. By the 1590s, symmetry also meant a harmonic arrangement of parts (a phrase which could also refer to Dandridge’s novel). By 1809 the word symmetrophobia was born (though this word doesn’t occur in the book, the book’s villain appears to fit into the category of symmetrophobe).

The word sultan entered English in the 1550s from Middle French, which borrowed the word from Arabic. Meaning ruler, king, queen, power or dominion. The Arabic word sultan was derived from the Aramaic word shultana, a word which spoke of both power & protection.

I have hopes, good readers, that you have something to say about sultans, symmetry, lions, pomegranates, the Alhambra, or Gwen Dandridge’s fine book.

My thanks go out to this week’s sources the OED, Gwen Dandridge’s blog, & Etymonline,