Pal Gwen suggested scat, which arrived in 1838 meaning go away. Scat is an abbreviation of an 1800s phrase, quicker than s’cat. Though nobody’s certain, the s preceding the cat may have represented the sound of the cat hissing as it skedaddled.

Betsy suggested burn rubber, an idiom that showed up in the mid-1900s in reference to cars accelerating before their tires caught up with them. A related term is lay some rubber.

Another idiom Betsy suggested is make like a ghost. Though I find multiple uses of this phrase in digital forums, I am finding no commentary regarding its origin. Maybe some hardworking etymologist did the research, then all his/her work made like a ghost.

Hit the Road, suggested by Sioux, showed up in the language in 1873. This idiom was celebrated with the addition of Jack in 1960 in a song written by Percy Mayfield & made famous by Ray Charles.

Sioux also came up with take a hike, which is considered a pejorative directive. Though the idiom take a hike seems to have appeared in the last fifty years, the solo word hike was used in the early 1800s with the same contemptuous sense.

Book it, suggested by Sami, has been around in that particular form since the 1970s & appears to be an abbreviation of bookity-book, an echoic representation of shoes running on a hard surface, first recorded in a 1935 Zora Neale Hurston story.

Here’s hoping you’ll comment regarding all these vamoose synonyms before you hit the road.

Big thanks to this week’s sources: Wordnik, Etymonline, The Free Dictionary, Dictionary.com, & the OED.
Posted by CS Perryess at 7:05 PM 6 comments:

I had assumed last week’s post on words meaning scram would be a one-shot deal, but so many friends wrote in with scram-related phrases and words I hadn’t covered that I’ve got to keep going.

Bruce suggested the term di di, in use by the American military during the Viet Nam War (aka Police Action). Di di is a direct borrowing from Vietnamese, though in Viet Nam both di di, get out of here & di di mau, get out of here pronto, are considered impolite ways to ask someone to beat feet (an idiom suggested by both Bruce & my friend Sioux).

Beat feet is an idiom that appears to have originated in American prisons or among American police, though nobody seems to be working very hard at finding its first use.

Bruce also suggested let’s split a phrase first used in American slang in 1954. Split comes from Middle English & originally meant to divide two things or remove something, which suggests the idiom let’s split may be more literal that figurative. A clearly related idiom suggested by another pal, Betsy, is the term splitsville, a word I find in use in many places, but I can find no background in it. First used when? First used where? Nada.

And my pal Sioux came up with let’s blow this popsicle stand, which is similarly un-researched, though the phrase did appear in a Mork and Mindy episode & in a Richard Dreyfus movie. Apparently the Teenage Mutant Ninja Turtles were also fond of the phrase. Also of interest, there may be a regional element at work, as the idioms let’s blow this pop stand & let’s blow this taco stand are used to mean the same thing.

Please leave a comment or two about all this in the comments section. Me? I’m splitsville.

Big thanks to this week’s sources: Wordnik, Etymonline, Straight Dope, Glossary of Military Terms, the OED.

Posted by CS Perryess at 7:33 PM No comments:

How many ways are there to say to leave? Here are a few that I find intriguing. Interestingly, only the first two come from sources other than American English.

Since 1844 English speakers have been able to shove off, a term born in the British boating world.

The classic American cop shows of our youth often included the theifly imperative Cheese it man, it’s the cops! Cheese it means stop, hide, quit, be quiet, or get out of here. Nobody’s sure where cheese it came from, but at least one etymologist has suggested it may have come from the word cease.

1950s westerns gave us the phrase, Get out of Dodge, meaning leave town, as so many westerns were based in Dodge City, Kansas, & there was seldom enough room in Dodge City into which a protagonist & antagonist might wedge themselves.

In 1928 the word scram materialized in American English. Its source is unclear. It may have been derived from scramble or it may have descended from the German word schramm, which means to depart.

Another American English term, to make tracks, showed up in 1835, meaning to move quickly.

Skedaddle also comes from American English & has an unknown source. It appeared in 1861 meaning to run away & was a form of military slang during the Civil War. Possible but unproven sources include scaddle, a dialectical English word meaning scare or frighten, & a Northern English dialectical word which meant to spill. Continuing in the uncertain parentage vein skedaddle may or may not have spawned the 1905 word skidoo, meaning to leave in a hurry, a word nearly always associated with the number twenty-three for no reason anyone has yet discerned.

Here’s hoping you’ll add a comment or two about all this in the comments section. Me? I’ve got to scram.

Big thanks to this week’s sources: Wordnik, Etymonline, Dictionary.com, the OED. 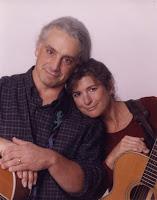 Jacquie and Rich are a fabulous singer-songwriter duo called Small Potatoes. They’ve been a big part of the household soundtrack these days, so darned if they didn’t inspire this post.

Potato entered English in the 1560s form the Spanish patata. The Spanish borrowed the word from the people of Haiti, who called their native sweet potato batata. The paler tuber brought to Europe in1565 from Peru is the tuber most first-world folks think of today as the potato: the potato of Idaho, of Ireland, of infamous emigration-inspiring famines, though it wasn’t called a potato until 1590. Oddly, this interloper was referred to both as the Virginia potato (geographic confusion, you say?), or the bastard potato (at the time it had to play second fiddle to the sweet potato).

The word tuber came to English in the 1660s from a Latin word meaning thick underground stem. It’s Proto-Indo-European root tubh-, which meant to swell, also gave us the word thigh.

My preferred term for potatoes is spuds, a word first applied to our friend the potato in New Zealand about 1845. Though nobody’s sure, spud appears to have come to English from Danish or Old Norse, where it meant spear, lance, & spade. That third meaning might certainly lead to spud’s modern meaning, though at some point in the 1680s English speakers also began using the word spud to refer to a short stumpy person or thing. Hmmm.

Have a minute? Check out Rich & Jacquie singing a ridiculous Who’s-On-First type song all about a traveling salesman meeting the Knott family: Shirley, Mae Bea & Wy.

Have another minute? Please leave a comment about all these potato-related etymologies, or about the musical group, Small Potatoes.
.

Big thanks to this week’s sources: Wordnik, Etymonline, Merriam Webster, the OED.
Posted by CS Perryess at 5:38 PM 2 comments:

Welcome to the final installment on words that refer to our belongings. You can find the first three posts here, here, & here.

The word accoutrements (which can sadly also be spelled accouterments) and means clothing, equipment or apparatus, arrived in English in the 1540s from Middle French. It came through Old French from the Vulgar Latin word, accosturare, to sew up. Though accosturare looks as though it may also be the root for costume, it is not, but it did give us the word suture.

The word possession arrived in English in the 1300s through Old French from Latin. Through all three languages possession has meant item one owns, however, in English the meaning demonic possession was added in the 1580s, just in time for the zealotry that led up to the Salem witch trials a century later.

An earlier Wordmonger “stuff” post compelled Julie Harris, to ask, “Can I use the word ‘things’ instead?” Absolutely. The word things came to Modern English from Old English. The singular form, thing, looked like þing & originally meant a meeting, assembly or discussion.  Because meetings involved discussions of items, thing picked up the meaning entity, item, being or matter. Though that original meaning of meeting, assembly or discussion has been lost in English, we can still see evidence of it in Iceland, where the nation’s general assembly is called the Althing. And that very 1960s phrase do your thing actually made its way into the language in the 1840s.

The word paraphernalia came to English in the 1650s from Medieval Latin, originally meaning a woman’s property other than her dowry. The Medieval Latin word’s source is Greek, where it held that same meaning and was constructed of the word parts pherein, to carry, and para, beside. The modern meaning, personal belongings or articles used in a particular activity showed up in 1791.

Good readers, please leave any thoughts regarding all these things in the comments section.

Big thanks to this week’s sources: Wordnik, Etymonline, Merriam Webster, the OED.
Posted by CS Perryess at 7:35 PM 6 comments: