Jet (as in a jet of water) showed up in English in the 1690s. It came through French from the Latin word iacere, which meant to throw. It doesn’t take much creativity to imagine how a word meaning to throw would end up referring to:

What fascinates me are all the other words that came from iacere.

jetty – early 1400s – rocks or land thrown into the sea
jetsam – 1560s – initially the act of throwing something overboard,  soon to morph into the items thrown overboard
jettison – 1848 – to throw overboard
trajectory – 1690s – the path of something thrown
adjective – late 1300s – from ad-iacere, meaning to throw near
adjacent – late 1400s – also from ad-iacere, meaning to throw near
jut – mid 1400s – throw in the way
eject – mid 1400s – to throw out
joist – early 1300s – lumber thrown down on which a floor can be built
interjection – early 1400s – a word thrown into a conversation
conjecture – late 1300s – a possibility one throws into an argument

As you consider the next list of words, imagine how they might have something to do with the Latin root iacere, to throw, then click on comments below & offer your explanation of the connection.

Big thanks to this week’s sources: Etymonline, Wordnik, Collins Dictionary, Merriam-Webster, & the OED.
Posted by CS Perryess at 9:52 AM 2 comments:

Sometimes what appears to be an unexplainable preference actually has an explanation. 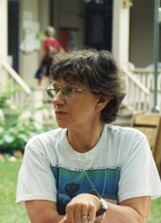 While discussing making a scene come alive, Patti mentioned that many editors tend to ask authors for detail, but the word detail has never resonated for her. Instead, she sometimes asks for more specifics. Her default term though -- the word that really latches onto what she’s looking for in a scene that needs to come alive -- is texture.

Interesting. The modern word detail, meaning a small, subordinate piece, came to English about 1600 from a French noun that originally meant cut into pieces.

Her second choice, the noun specifics, arrived in English about that same time from Latin through French. The original Latin word meant kind or sort, & is also the parent word for the word species.

Patti's preferred word, texture, made its way into English two centuries earlier from Latin through Middle French. It’s related to the word textile & comes from a verb that meant to weave or fabricate.

In his/her efforts to help an author craft a book, an editor is doing all s/he can to help the author weave the disparate strands of character, story, setting & tension into something whole, something complete. Nobody wants a story to be cut into pieces. Maybe it's no surprise that a gifted, longstanding editor winces at the use of the word detail, finds the word specifics acceptable, but not quite right, & relishes the word texture.

Does Patti’s word choice when it comes to editorial advice reflect a sixth sense regarding the history of these words? Can a word’s origins follow it from language to language & culture to culture, through centuries of change?

Readers, writers, what are your thoughts on this? Please chime in by clicking on comments below.

Big thanks to this week’s sources: Etymonline, Wordnik, Collins Dictionary, Merriam-Webster, & the OED. Photo by Megan Frances Abrahams.
Posted by CS Perryess at 6:07 AM 4 comments: 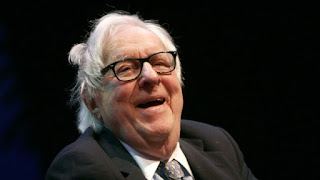 Last week’s post featuring some thoughts from a favorite author luminary led me to this week’s post. I’ll get back to etymologies and such next week, but for now, I hope you’ll have a good time with the ever-prolific & fascinating Ray Bradbury.

“You have to know how to accept rejection and reject acceptance.”

“We are cups, constantly and quietly being filled. The trick is knowing how to tip ourselves over and let the beautiful stuff out.”

“Every morning I jump out of bed and step on a landmine. The landmine is me. After the explosion I spend the rest of the day putting the pieces together.”

I’m hoping some of you might choose a quote from above & have something to say about it in the comments section.

Big thanks to this week’s sources: RayBradbury.com, SearchQuotes, BrainyQuote, &  Quotes.net -
photo from FamousAuthors.org
Posted by CS Perryess at 4:22 AM 6 comments: 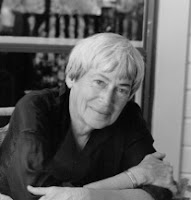 There are heaps upon heaps of amazing people out there, & a lot of them say things worth pondering. This week we’ll take a look at a few quotes from Ursula K. Le Guin.

Born in 1929 & still going strong, author Ursula K. Le Guin has won the National Book Award, the PEN-Malamud, the Hugo, the Nebula, the National Book Foundation Medal, & tons more. Many readers know her as a brilliant fantasy writer, though not all her work falls in that genre. To cast a tiny light into her thinking, here are four of her quotes:

“My imagination makes me human and makes me a fool; it gives me all the world and exiles me from it.”

“To light a candle is to cast a shadow.”

“The creative adult is the child who has survived.

“The unread story is not a story; it is little black marks on wood pulp. The reader, reading it, makes it live: a live thing, a story.”

I’m hoping some of you might choose a quote from above & have something to say about it in the comments section.

Big thanks to this week’s sources: UrsulaKLeguin.com, SearchQuotes, BrainyQuote, &  Quotes.net
Author photo by Marian Wood Kolisch.
Posted by CS Perryess at 7:27 AM 10 comments: