This week I discovered something about words that refer to immeasurable amounts. Most are of questionable origin.
The noun heap came to Old English from the West Germanic word haupaz, meaning a great multitude or pile. Its earlier source is not clear. One school of etymologists argues that heap may have come from a Latin word meaning lie down, while another argues it may be related to another Old English word meaning high.

The noun lump came to English in the 1300s as a surname (a shame Mr. Dickens never made use of it). Though etymologists quibble over lump’s origins, no definitive source has been found.

The noun jumble, meaning a confused mixture, showed up in the 1660s. Its source was the verb jumble, which appeared forty years earlier, meaning to move confusedly. Though its origin is uncertain, it seems jumble may have been modeled on the sounds of the words stumble & tumble.

The noun wad originally meant a fibrous mass. Wad appeared in the 1400s. Though nobody’s sure about wad’s origin, it may have come from Medieval Latin (wadda), Dutch (watten), French (ouate), Italian, (ovate) or Medieval English (wadmal).

In the early 1300s bunch came to English, meaning a protuberance on the body. Though some etymologists posit that bunch may have been born through combining the word bump with the sound of being hit, nobody’s really sure about the source of bunch (and being hit sounds like –ch? Ouch, I guess?)

Meaning a thick block, chunk came to English in the 1690s. Again, we’re not sure of its source, though it may be a nasalized version of the cut of meat called a chuck.

And finally we reach the noun slew. It showed up in 1839 meaning large number. Unlike its brethren, slew has an identified source. It came through Irish (sluagh) from a Celtic & Balto-Slavic word spelled sloug, meaning help or service.

I’m hoping you have some reaction to this heap, bunch, wad, jumble, chunk, lump, or slew of words. If so, please enter your thoughts in the comments section.

Big thanks to this week’s sources: Etymonline, Wordnik, Merriam-Webster, & the OED.
Posted by CS Perryess at 7:26 PM 2 comments:

Due to an unlikely dental event & its aftermath, I find myself pondering the word pill.

Meaning a small ball or round mass of medicine, the word pill showed up in English about 1400 after a tour through Middle Dutch, Middle Low German & Middle French from its humble beginnings in Latin, where its literal translation was little ball, yet even back then it was primarily used to refer to a small ball of medicine. Looking further back on the language tree, many etymologists believe pilula, that Latin word meaning little ball, came from the word pilus, which meant hair. These same etymologists are pretty sure words for hair and ball were so closely intertwined because of the inglorious hairball, which is apparently not just a modern problem.

Though we’re not entirely sure, it’s believed Latin hairballs may have also been the source of the word pearl, appearing in English in the 1200s after making its way through Vulgar Latin, Medieval Latin & Old French.

In the 1300s, the word pellet appeared after a bit of time in Vulgar Latin & Old French, also born of the hairball.

Some possible, yet faux siblings include pillar, pillory, & pile. These all come from another Latin root pila, meaning stone barrier or heap. The name Pilar came from these, as Pilar is a reference to a pillar carved with the image of the Virgin Mary. Another faux sibling of pill is the word pilaf, which comes through Turkish from Persian & refers to a delicious rice dish completely devoid of hairballs.

And for our last grandchild of the inglorious hairball, we come to the verb pillage, which appeared in English in the 1300s, meaning the act of plundering. Pillage came through Old French from Latin & most likely came from the idea of stripping someone of his/her skin or hair, an unseemly act providing another inglorious image. Please accept my apologies.

Anything to say about hairballs? If so, just click on the word “comments” below & enter your comment.

Last week’s post covered a steaming heap of unlikely words that shared a common root meaning to speak. In an attempt for balance, I took a look at the etymologies of silence & quiet for this week’s post, but came away uninspired. The word mute is another matter.

Mute made its way into English in the 1300s through Old French & Latin from Greek. Initially, mute meant pretty much what it mostly means today – silent. By the 1570s mute picked up the meaning stage actor engaging in pantomime. By 1811 a mute could be applied to a stringed instrument & by 1841 a mute could be used on horns.

The Greek source for mute was myein, to be shut, & myein has some intriguing progeny.

One branch of the myein tree grew like this:

It started way back in Greek as myein, to be shut.
Next, it became mystes, one who has been initiated (possibly referring to having been previously shut out).
From there it became mysteria, a secret rite or doctrine.
Next, it grew to be mysterium, secret worship or secret thing.
And from there it became mistere, secret or hidden meaning.
Then finally (in the early 1300s) it became mystery, meaning religious truth via divine revelation. These days most dictionaries offer about a dozen meanings for mystery, generally starting off with something like an event that baffles or eludes the understanding.

Another mysterious branch of the myein tree grew in this fashion:

Of course, we start with myein, to be shut.
Next comes myops, which literally meant close the eyes, but came to mean near-sighted.
By 1727, we have the word myopia.

Mute is often confused with a word that started out as a Proto-Germanic word meaning assembly or council (ga-motan) It next moved into Old English as gemot, meaning meeting. One must assume Old English meetings were contentious, as the next Old English word on this tree was moot, to debate. By the 1530s, moot picked up the adjectival meaning debatable or discussion of a hypothetical law case.

So from that old Greek word myein we ended up with mute, myopia & mystery, but not moot.

I’m hoping you’ve got something to say about all this. If so, just click on the word “comments” below & enter your comment.

Big thanks to this week’s sources: Etymonline, Wordnik, Collins Dictionary, Merriam-Webster, & the OED.
Posted by CS Perryess at 9:01 PM 4 comments:

Take a look at the following words and ask yourself how they might possibly share a common root:

Hmmm. I must admit, given this list, I wouldn’t have a clue. 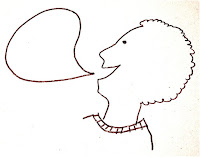 The common root here is the Proto-Indo-European word bha-, to speak.

The word ban showed up in Old English about the same time Old English showed up. Ban came to us through Old High German from a Proto-Germanic word meaning banish, expel or curse (all actions which must be spoken). Like the rest of the words on this list, it seems to have started with bha-, to speak.

Beckon showed up in Old English about the same time through a West Saxon & possibly Old High German word meaning to make a mute sign or to speak without words.

Prophet appeared in English in the late 1100s through Latin from a Greek word meaning one who speaks for the gods.

Fairy showed up in English in 1300, through a Latin word meaning that which is fated, & of course, for something to be fated, it must first be spoken of.

Fame showed up in the early 1200s through Old French from a Latin word meaning talk, rumor, report, good reputation.

Affable – came from Old French through a Latin word meaning one who can be easily spoken to. It appeared in English in the 1400s.

Infant appeared in English in the 1300s from a Latin word meaning unable to speak (the in- meaning not & the fant meaning speak).

Confess came from Old French from a Vulgar Latin word meaning speak together or admit. Like infant, it arrived in the 1300s.

Fable also showed up in the 1300s through Old French from a Latin word meaning spoken narrative.

Nefarious appeared in English in the 1600s from a Latin word meaning wicked crime. In this case, the ne- negates the root fari-, which meant divinely spoken, which suggests that a crime is  an activity a higher power has forbidden.

Big thanks to this week’s sources: Etymonline, Wordnik, Collins Dictionary, Merriam-Webster, & the OED.
Posted by CS Perryess at 9:21 AM 6 comments: