Gratitude is a fine thing, and in honor of the one holiday that focuses on gratitude, let’s dip our toes into the etymology of the word thanks. It came to Old English through a heap of loosely related languages including Old Saxon, German, Old Norse, Danish, and Old Frisian. We can still see the relationship with the modern German word danke.

All these terms shared the simple meaning, to thank. What I find fascinating is that the Proto-Indo-European grandmother of all these gratitude-expressing words meant to think or to feel. This might suggest that one must be thinkful in order to be thankful. The flipside being that thinklessness causes thanklessness.

This post is intentionally brief, as I’m hoping you’ll take some time to indulge yourself in thinkfulness and thankfulness. If you are inspired to express gratitude about anything at all in the comments section, feel free.

Big thanks to this week’s sources: etymonline.com, the OED, & wordnik.com.

From sound to silence

From sound to silence

Our modern word sound comes to us from three sources.

Most the meanings of the word sound started in Latin, then bounced around between Old French and Old English before settling down into the meanings that follow.

As a noun, sound  can mean:
-sensation sensed through the ear
-noise

As a verb, sound can mean:
-to be audible
-to cause an instrument to make sound
-to measure the depth of

The noun meaning a narrow channel or body of water, however, came from the Old Norse word sund, which meant both swimming & strait.

The adjective form of sound meaning free from defect or injury came from an Old English word meaning safe, or having all faculties. This word was gesund, which, as you might have guessed, made its way into German to become gesundheit.

And the absence of sound is silence, a word that appeared in English in the 1200s from an unknown source through Latin & Old French.

And these two words together lead folks of a particular age to think of Paul Simon, whose “words like silent raindrops fell” (well, maybe not), in his 1965 hit song, “The Sound of Silence”. I hope you’ll join me in sending good thoughts to Mr. Simon, who just last month, celebrated his 75th birthday.

And, as always, feel free to speak your mind in the comments section.

Big thanks to this week’s sources: Merriam-Webster, Wordnik, Etymonline, biography.com, & the OED.
Posted by CS Perryess at 6:02 PM 4 comments:

All from the bard

All from the Bard

Recent events have inspired politicians, pundits, and folks on the street to speak – shall we say – idiomatically. Any number of the printable idioms I’m hearing recently have been borrowed from William Shakespeare. Here’s to appreciating a brief sample: 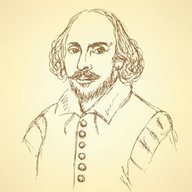 “Not slept one wink”
From Cymbeline

“Makes your hair stand on end”
From Hamlet

“The world is my oyster”
(Actually, the original was, “The world’s mine oyster”)
From Falstaff

“Brave new world”
From The Tempest

“What’s done is done”
from Macbeth

May all your idioms be as well-tested.

Big thanks to this week’s sources: An English Muse, MIT’s Complete Works of Shakespeare.
Posted by CS Perryess at 1:46 PM 2 comments:

In light of the election, I offer some thoughts gleaned from folks wittier, wiser, & sometimes much snarkier than I.

“The vote is a power, a weapon of offense & defense, a prayer.”
-Carrie Chapman Catt

“An election is coming. Universal peace is declared, & the foxes have a sincere interest in prolonging the lives of the poultry.”
-George Eliot

“Though in paradise the lion will lay down with the lamb, in Paradise they will not have to submit their rival political views to general election.”
-Amelia E. Barr

“Money was the manure of politics.”
-Barbara Michaels

“The trouble with the rat race is that even if you win, you’re still a rat.”
-Lily Tomlin

“A Platform is something a candidate stands for & the voters fall for.”
-Gracie Allen

“Women are young at politics, but they are old at suffering; soon they will learn that through politics they can prevent some kinds of suffering.”
-Nancy Astor

May the election itself & the week following it both go more smoothly than you anticipate. And if you have comments about the quotes, please share them.

Big thanks to this week’s sources: Jon Winokur’s The Portable Curmudgeon & Rosalie Maggio’s The New Beacon Book of Quotations by Women.
Posted by CS Perryess at 1:08 PM 9 comments: