In the family way?

In the family way?

The Victorian age is infamous for its euphemisms. The mere suggestion that people had body parts or employed these body parts was considered beyond rude. Add Victorianism to the prudism of 1800s America (& beyond), & the euphemisms get curiouser & curiouser.

A significant euphemism-creation challenge revolved around the discussion of pregnancy, which - one might say - gave birth to euphemistic brilliance.

Here’s a short list of ways people once avoided the apparent indecency of the state of pregnancy.

enceinte (late 1700s)
in the family way (1796)
poisoned (early 1800s)
expecting (1817)
anticipating
bow-windowed
having a blessed event
in a delicate condition (1780s)
in an interesting condition (1748)
confined
blossoming
indisposed
eating for two
carrying
And in a nod to our prudish roots, we modern Americans have come up with some of our own:

Nothing like making a lot of effort toward obfuscation, eh? 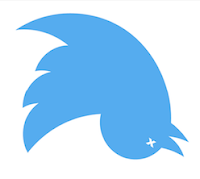 Augur is the root of the word inauguration.

Birds are known to tweet (though not after being sacrificed).

So it might be fair to say that since inaugurations were born, countless tweets contributed to their success or failure.

Big thanks to this week’s sources:  Etymonline, Wordnik, Merriam-Webster, cafe.com, & The OED.
Posted by CS Perryess at 8:18 AM 1 comment:

“First loke, then aftirward lepe.”
This proverb was embraced by cautious folk of the British Isles during the 1400s.Though we spell things differently these days, many of us still appreciate the proverb, look before you leap. It doesn’t suggest we avoid risk altogether, just that we employ caution before doing so.

The word risk came to English in the 1660s, from Italian through French, though nobody’s figured out where the Italians got their form, riscare, which meant run into danger.

A near-synonym of risk is gamble. It seems to have jumped into Modern English sometime around the 1720s from Middle English, where it was the word gamenen, to play, jest, or be merry. Before that, back in Old English, it was gamenian, to play, joke, or pun. Gamble is related to the words game & backgammon & was initially considered slang, though nobody’s sure whether the distinction was made due to linguistic reasons or in condemnation of the act of gambling.

Another near-synonym of risk & gamble is the word chance. The noun chance appeared in English in the 1300s, meaning an occurrence, something that takes place. It came from Proto-Indo-European through Vulgar Latin & Old French from a word that also gave us cadence, cascade, cadaver, & accident. Chance didn’t take on a verb’s meaning, to risk, until 1859.

And when we look before leaping, we take a leap of faith, an idiom introduced in the 1800s by Kierkegaard. Leap came to English as early as the 1200s, from an Old English word meaning to jump, run, do, or dance. We can’t seem to trace it back any further, though it’s noteworthy that forms of this word occur only in Germanic languages. And the faith bit of leap of faith came from Proto-Indo-European through Latin & Old French. Its linguistic brethren include bid, bide, fiance, fiancee, federal, & affidavit.

Thanks for taking the leap of faith & reading this Wordmonger post. If you’ve got something to say about it, please leave it in the comment section.

Big thanks to this week’s sources: AnswerStand, Etymonline, Wordnik, LibraryOfTheology, & The OED.

Change is in the air, & soon to be in the Oval Office. Though the country is divided on whether this will be good change or bad change, it will definitely be change.

Here are some wise women’s thoughts about change:

I never wanted what I thought I wanted
But always something else
Which changed again as soon as I had found it.
-Mary Carolyn Davies

Fluidity and discontinuity are central to the reality in which we live.
-Mary Catherine Bateson

You must not change one thing, one pebble, one grain of sand, until you know what good and evil will follow on that act.
-Ursula K. Leguin

Once an old woman at my church said the secret is that God loves us exactly the way we are and that he loves us too much to let us stay like this, and I’m just trying to trust that.
-Anne Lamott

May you have the courage to work against bad change, the flexibility to roll with odd change, & the good sense to celebrate positive change.