The image of Uncle Sam = the USA. words, they change over time.

The first images of Uncle Sam appeared during and after the War of 1812. He was clean cut, wore a black suit, and appeared to be in his thirties. As the nation aged, so did Uncle Sam. 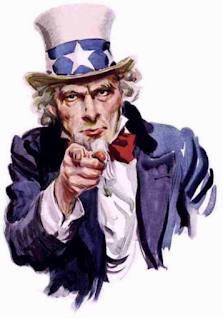 Most historians appear to agree that our modern use of the term Uncle Sam is based on New York meatpacker, Samuel Wilson. During the War of 1812, Samuel and his brother Ebenezer got the gig to supply meat to the soldiers on the battlefield. The US Army wasn’t Sam and Ebenezer’s only customer though, so in order to deliver the right meat to the right place, the barrels of salted beef and pork bound for the battlefront were labeled “US” (for United States). Since the New Yorkers who worked for Samuel and Ebenezer called Samuel Uncle Sam, the connection was made. Who feeds our boys in uniform? Uncle Sam.

As time progressed and President Lincoln became a prominent figure, cartoonists’ images of Uncle Sam became taller, older, leaner, and whiskered, leading eventually to the iconic Uncle Sam most of us think of today — the Army recruitment image drawn by James Montgomery Flagg in 1917.

So this term & image have morphed in meaning, starting out as a New York meatpacker, shifting to provider, then to recruiter, with many politically inspired twists & turns along the way.

Some may argue a picture is worth a thousand words. I’d submit that pictures and words may have more in common than we think.