Adults have an unlimited number of ways to label the unwanted noise of children, and most those words are pretty interesting.

Though my father was the uncrowned king of foul language, his default word for kid-noise was pretty tame. Racket appeared in English in the 1560s, meaning loud noise. Racket appears to be imitative in nature, &/or may be related to the Gaelic word for noise, racaid. The added meaning dishonest activity came to English a bit later & most likely has to do with the purposeful noisy kerfuffle made by a pickpocket’s compadre with intent to distract the pickpocket’s victim. As used in the game of tennis, racquet came to English in the 1500s & appears to have come from the Arabic word rahat, meaning the palm of the hand (the precursor to the game of tennis looked a bit more like handball).

Clamor came to English through French in the late 1300s from a word meaning outcry, call or appeal.

In the early 1300s English picked up the word noise from an Old French word that meant din, disturbance or brawl. The Old French word came from a Latin word which was used figuratively to mean disgust, annoyance, or discomfort, but literally meant seasick. This Latin word was nausea.

One school of etymologists tells us a Low German word meaning cry like a cat gave us caterwaul. Another school argues that caterwaul came from adding the Dutch word cater (tomcat) to the Middle English word waul (to yowl). At least these two arguing groups both agree caterwaul appeared in English in the late 1300s.

Tumult comes from a Latin word meaning commotion, disturbance, or uproar, & — like clamor, noise, & caterwaul — arrived in English in the late 1300s. Tumult is related to the word tumere, meaning to be excited, to swell. Tumere also gave us tumor, tuber, & tumescent.

And last there is din, which the Old English spelled dyne. Din came through Germanic sources from a Proto-Indo-European word meaning to make noise.

Have any noise to make about all this? If so, please do so in the comments section.

My thanks go out to this week’s sources Etymonline, Collins Dictionary, Merriam Webster, Wordnik, & the OED.

Since last week we took a look at dog idioms, this week we’ll consider the etymologies of some selected dog breeds.

It would be reasonable to assume the word poodle comes from French, but it actually came to English in 1808 from the German word pudelhund, which meant water dog. At the time, poodles swam into bodies of water to retrieve ducks and such. And yes, poodle is directly related to the word puddle.

And schnauzer, which sounds as though it came from German, actually did. In 1923 schnauzer came to English to label a particular sort of terrier. Schnauzer meant growler, & came from the word schnauze, which meant snout. And yes, snout, snoot, & schnoz all came from this same source.

Chow-chow comes, as one would expect, from Chinese. Though it’s uncertain what the root is, some etymologists argue it’s a reduplication of the Chinese word cha, which means mixed. As every breed is actually a mixture of earlier breeds, this proposed explanation makes good sense.

Back in 1858 an undetermined native language of North America gave us chihuahua, which meant dry place. One of the many dry places in North America earned this moniker, as did the small dogs plentiful in the region.

Akita came from a Japanese word meaning field of ripe rice. This description applied to a region of northern Japan. Eventually, the energetic dog of the area also took on the name.

The word mastiff came to English in the 1300s through French from a Latin word meaning gentle & tame. Though many folks might look at a modern mastiff & not immediately think gentle & tame, guard dogs living in people’s homes have to be well-mannered, & the mastiff was bred to be a guard dog. Many etymologists think the word mastiff might have been additionally influenced by the Old French word mestif, which meant mongrel.

Any thoughts on all these dog breeds, or all the dogged work etymologists have done to figure all this out? Please use the comments section.

My thanks go out to this week’s sources Etymonline, The Free Dictionary, Collins Dictionary, Merriam Webster, Wordnik, & the OED.
Posted by CS Perryess at 7:04 AM 2 comments:

Dogs make it into English idioms all the time, as dogs make their way into our hearts. As you consider this photo of Zoe, who recently left this crazy earth, consider these: 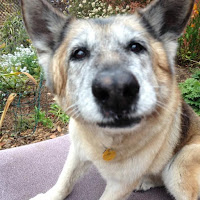 dog-eared
every dog has its day
raining cats & dogs
go to see a man about a dog
hot diggety-dog!
a dog’s life
let sleeping dogs lie
meaner than a junkyard dog
put on the dog
tail wagging the dog
hair of the dog that bit you
life in the old dog yet
you can’t teach an old dog new tricks
in the dog house

My thanks go out to this week’s sources The OED, Etymonline,  The Free Dictionary, & Cesar’s Way
Posted by CS Perryess at 7:23 AM 8 comments:

A particular physical characteristic of mine inspired this post.

The word bald has been with us since the 1300s, meaning wanting hair in some place where it naturally grows. Though we’re not really sure where the word bald came from, there are some likely sources. The Proto-Indo-European word *bhel- meant to shine, flash, or gleam, the Celtic word bal meant white patch or blaze, & the Sanskrit word bhalam meant brightness or forehead.

Appearing in the 1580s, meaning of black & white coloring, piebald appears to have come from combining pie, a shortening of magpie, (a black & white bird)  with the older sense of bald, meaning white. 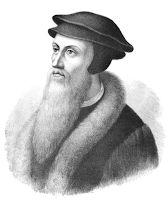 Skewbald has been with us since the 1650s, meaning of brown and white coloring. Nobody’s sure where the skew in skewbald came from, but it’s pretty clear the bald bit came from that earlier white meaning of bald.

Who would think it’s germane, but in the 1840s the word chauvinism was born, meaning patriotism degenerated into a vice. It came from the character Nicolas Chauvin (of Théodore & Hipployte Cogniard’s play, La Cocarde Tricolore). This character hung onto his association with Napoleon & his politics long after Napoleon was gone. By the 1800s chauvinism broadened to also mean racism, & by the 1960s chauvinism began to mean sexism. Chauvin is the French form of Calvin, which comes from the Latin word calvus, meaning bald. Though paintings of John Calvin (originator of Calvinism) always show him wearing a natty cap, one must wonder why John Calvin wore that natty cap.

Any thoughts out there on baldness? If so, please leave a comment.