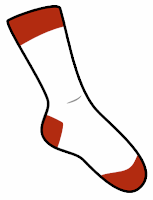 My thanks go out to this week’s sources the OED, Phrase Finder, The Lonely Sock, Sima Lixia, & Etymonline
Posted by CS Perryess at 6:42 PM 5 comments:

The Sanskrit word smarati, or remember, is the grandmother of many words. Here are a few.

The word memory came to English in the 1300s, from the French word memoire, which came from the Latin word memoria, all meaning pretty much the same thing. And memoria came about after the Sanskrit word, smarati made its convoluted way across a continent, through Proto-Indo-European, losing its last two syllables, shifting a vowel from a to e, to become smer, then losing its initial consonant to become mer.

It’s pretty easy to see the resemblance between memory, memoir & remember, but smarati also managed to be the impetus for the word mourn, which came from the Proto-Germanic murnan or mearn, to remember sorrowfully, which came from smer, which started out, of course, as smarati.

Though not all etymologists agree, it’s very likely smarati is the unlikely root for tirade. It seems tirade, which appeared in English in the early 1800s, from French, initially meant a volley of words, which comes from the Old French, martirer, to endure martyrdom. Isn’t it delicious that putting up with a verbal tirade is etymologically equated with being burned at the stake?

Of course, the word martyr also originated with the Sanskrit smarati, as did the even more unlikely word, retire. It seems reasonable that retire would have something to do with being tired, however, there appears to be no etymological support for that. Instead, retire entered English in the 1530s as a military term, to withdraw to some place for the sake of seclusion, which came from the Old French tirer, which has its roots in that wonderful grandmother of a Sanskrit word, smarati, who, let’s hope – after all that good work – has finally withdrawn somewhere for the sake of seclusion.

Followers – have any of you felt martyred to someone’s tirade? Do any of you take heart that the root of mourn is more fundamentally about remembering than it is about sadness? Any other thoughts about smarati & its offspring?

Also, my audiobook narration of F. Scott Fitzgerald’s first published short story is up on audible! Check it out here.