The word slang entered the language in 1756, meaning special vocabulary of tramps or thieves. By 1801 it had generalized to mean jargon of a given profession, & these days it mostly means casual, informal, or playful speech. Etymologists seem to agree that slang’s origin is unknown, though two probable sounding (& interesting) theories have been disproved. The first is that the word slang has a relationship to the word language, in particular the French word langue. As logical as that seems, linguistic forensics don’t’ support it. Another disproved theoretical origin is the Norse term slengja kljeften. Its literal translation is to sling with the jaw & its meaning is to abuse with words. It warms my heart to know that as I type, hardworking etymologists are chipping away in the word mines trying to get to the bottom of this mystery.

A near-synonym of slang is jargon. It came to English in the 1300s meaning unintelligible talk or gibberish. It came from Old French, in which jargon meant chattering, especially of birds, which came from the Latin word garrire, which also meant chatter.

In the 1650s the word lingo came to English. Lingo was probably a corruption of the Latin term lingua franca, a medium of communication between two peoples.

The word patois, which carries a somewhat positive connotation in modern English, started out just the opposite. It came to English meaning a provincial dialect, & carried all the cultural baggage associated with living far from the assumed center of culture. Its most likely source is the Old French word patoier, or to paw or handle clumsily.

A somewhat less judgmental term was the word vernacular, which simply meant native to a country, & showed up in the 1600s from the Latin word vernaculus, or native, local, indigenous.

Ah, nothing like a little slang, eh? Please leave any comments in the comments section.

Big thanks to this week’s sources: Wordnik, Etymonline,, Merriam Webster, & the OED.
Posted by CS Perryess at 10:51 PM 4 comments:

In June of 2015 our friends at the Oxford English Dictionary updated the OED. “New” words can appear to come out of left field. They can also be remarkable because they don’t seem to be new at all, or for myriad other reasons. Though many words on the “new” list are worthy of comment, the following words caught my eye.

There are two different types of backronyms. The first sort is a word which is not an acronym, but is believed to be one. The story has been told that the word cop stands for constable on patrol, but this is not the word’s origin. The second type of backronym is a purposefully constructed acronym. The condition of sneezing upon seeing a sudden bright light has been creatively labeled autosomal dominant compelling helio-opthalmic outburst, or ACHOO.

The word cisgender (in opposition to transgender) refers to a person who identifies or experiences the same gender that society associates with that person.

To declutter is to remove clutter.

A decorated thermal insulation jacket for cans or bottles is called a koozie.

The word meh is an interjection used to communicate a lack of enthusiasm.

A stagette party is the party held for the bride.

A yaar is a friend, buddy, or pal.

Good readers, which of these seem worthy of comment to you?

Big thanks to this week’s sources: Wordnik, Etymonline, The Public OED, About Education, & the OED.

The July 9 & July 16 posts took a look at word histories of words that somehow deal with words. This week’s post is the third in the series.

When someone (in particular a politician) can’t seem to make up his/her mind on an important topic, s/he is said to be a waffler. Though it’s reasonable to assume this has something to do with a waffle having two sides, the can’t—make-up-one’s-mind sort of waffle & the tasty-with-butter-&-syrup waffle have completely different origins. The latter showed up in English in 1744 from German through Dutch, with its grandmother Proto-Germanic word wabila meaning web or honeycomb. It’s related to the word weave. Political waffling, though, is probably imitative of a dog’s bark & showed up in English in the 1600s, meaning to yelp or bark like a puppy. In time, the term grew to mean to speak foolishly, & in 1803 landed on today’s meaning, to vacillate or equivocate.

Books, plays, movies & speeches are all constructed of words, & on those sad occasions when they don’t do well, such things are said to have laid an egg. Etymologists are presently duking it out over two posited sources for this one. Theory one: in cricket or other games, when a team scores nothing, the zero resembles an egg, thus, the team that falls flat has laid an egg. Theory two: when a hen lays an egg, she makes a big fuss, clucking with pride at her accomplishment, but none of her compadres are impressed. I’ll be sure to keep an eye on the battle & will report immediately with breaking news on this front.

The news is delivered in words. An incorrect, though clever, folk etymology suggests that the word news is an acronym standing for all the information from the north, east, south & west. Actually, the word news came through French from the Latin word nova, new, arriving in English in the 1300s & meaning new things.

A person who is compelled to share his/her opinions is a kibitzer. This word showed up in English in 1927 & came from German through Yiddish. The Yiddish word, kibitsen, meant to offer gratuitous advice as an outsider, while the German word meant to look on at cards. The German meaning was inspired by folktales involving a small shorebird, the kiebitz, whose fictional habit involved interfering in card games by sitting on a card player’s shoulder & muttering unwanted instructions. The word kiebitz appears to be an imitation of the call of the kiebitz, or lapwing.

I’m hoping some of you might be willing to share some kibitzing regarding all this. If so, please do so in the comments below.

English is rich with odd etymologies. Last week’s post considered three etymologies having to do with writing or words, & here are a few more.

Most of us recognize that our words – written & spoken – come with some level of bias. The word bias showed up in English in 1520 from Old French. It came from the surreptitious practice of nefarious bowlers who used to weight competitors’ bowling balls so they wouldn’t roll straight. The inserted weight was known as a bias.

Recently, politicians on both sides of the aisle have made news due to a very specific use of words (some would say an overuse of words), the filibuster.  Our modern understanding that a filibuster involves sanctioned legislative obstruction showed up in 1865, but previous to that, the word referred to pirates. First recorded in 1580, the flibutor was defined as a West Indian buccaneer, probably coming from the Dutch word vrijbueter, or freebooter. In the Americas, the term applied to lawless military adventurers before making its way onto the Senate floor.

A less formal but arguably important employment of words showed up in English in 1763, originally meaning to drink to each other. Hobnob was original habnab, most likely from the Old English habban nabban, to have or have not. Just as person A at the pub might raise a glass to person B, who might raise a glass back to person A, quickly followed by a repeat of the same, our modern definition of hobnob suggests the give & take of friendly socializing.

A slightly less friendly form of hobnobbing comes into play when we bandy words. The word bandy showed up in English in 1570 from the precursor of field hockey, a game called bandy, which involved players knocking a ball back and forth with crooked sticks. Bandy originally meant to strike back & forth, & in time morphed to mean exchange blows, then eventually moved into the metaphoric meaning, to exchange verbal blows.

On another note, if you’d like a free Anne R. Allen audiobook I produced, check out the link to the left.

Please share any thoughts on bias, filibuster, hobnob or bandy in the comments section.

Big thanks to this week’s sources: Wordnik, Etymonline, Jordan Almond’s Dictionary of Word Origins, & the OED.
Posted by CS Perryess at 8:12 PM 4 comments:

Etymologies can be pretty fascinating. This week’s post considers three etymologies having to do with writing or words, but first…

…this just in from the Shameless Self Promotion Department: 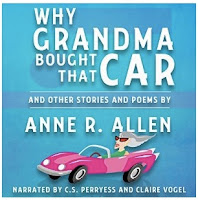 If you’d like a free audiobook written by the inimitable Anne R. Allen & narrated by the talented Claire Vogel & yours truly, click here (instead of on the image). Why Grandma Bought That Car & Other Stories & Poems is a fun & thought-provoking collection. Claire & I had a grand time recording it.

And now back to word-related idioms.

The word magazine originally had nothing to do with words. Magazine came through Middle French & Italian from the Arabic word makhzan, or storehouse. Typically, a makhzan was used by armed forces to store weapons, but the editors of Gentleman’s Magazine, first published in 1731, chose to store words & stories in their magazine. And this new interpretation of the meaning stuck.

Our modern meaning of the word clerk, business assistant, showed up in the 1550s, but it’s the clerk’s ability to read & write that earned the clerk his/her moniker. The original English word clerk meant man ordained in the ministry. It came from Latin through Old French. The shift in meaning reflects the fact that in medieval times only clerics were able to read & write.

The 1907 book, Are You a Bromide, written by Gelette Burgess inspired the modern understanding of the word blurb. On the back of the book a young woman was portrayed, labeled Miss Belinda Blurb. Her speech bubble read, “Yes, this is a blurb.” And Miss Belinda Blurb continues to grace flap copy, graciously promoting books & authors to this day.

Please share any thoughts on blurbs, clerks, magazines, or audiobooks in the comments section.

Big thanks to this week’s sources: Wordnik, Etymonline, Jordan Almond’s Dictionary of Word Origins, & the OED.
Posted by CS Perryess at 12:05 AM 3 comments: