Last week’s post on words born in California caused me to wonder about words that began their lives (as English words) in other states. So why not Pennsylvania?

In 1830 the word hex showed up in English, courtesy of this same group of people. The original German word was hexe, to practice witchcraft. It was used in English initially as a synonym to the noun witch, but later grew to mean magical spell.

In 1919 the word dunk showed up in the language, meaning to dip. Its Pennsylvania German source word meant to soak. Dunk made its way into the world of basketball in 1937.

But not all Pennsylvania-born words come via those early German settlers.

Bits of seasoned pork dipped into cornmeal, fried and pressed into cakes are known as scrapple, a take-off on the word scraps, most likely from Old Norse, & born in Pennsylvania about 1850.

One of the native Iroquois tribes of Pennsylvania loaned its tribal name to the conestoga wagon in the 1750s. Later, an abbreviation of the word conestoga came to mean cigar. First known as stoga & later as stogie or stogy, the cigar was thus named due to conestoga drivers’ fondness for cheap cigars.

Our present meaning of the word cent came to English during the 1786 Continental Congress in Pennsylvania. Though from the times of Middle English cent (borrowed from Latin) had meant hundred, the Continental Congressfolk wanted to move away from the Revolutionary & Colonial dollars being divided into ninetieths (no kidding), so they embraced the suggestion of Robert Morris that they divide the dollar into one hundredths and label those hundredths with the word cent. The story is that the related word percent influenced Morris’s thinking.

And in 1965, Pennsylvanian Pauline M. Leet coined the word sexist by combining the word sex with the intent of the –ist from racist. Leet was the Director of Special Programs at Franklin & Marshall College. When her coined word hit the presses in the 1968 book by Caroline Bird, Born Female, it became a part of American parlance.

If you have anything to say about Pennsylvania &/or its contributions to English, please do so below in comments.

Big thanks to this week’s sources: Etymonline, Wordnik, Merriam Webster, & the OED.

Posted by CS Perryess at 4:25 PM No comments:

In the world of words we tend to think in terms of languages, regions, & dialects. This week we’ll turn those tables & consider words born in a chunk of the map identified with no thought at all to language & dialect: the state of California.

In a case of etymology reflecting the uglier side of history, the abalone got its English name in 1850. The word abalone was stolen from the Spanish (abulon). And the Spanish stole it from the native Costanoan speakers of California who called the shellfish aluan.

In 1855 the word shenanigan became a way of defining wild behavior on the streets of San Francisco. It’s unclear where the word came from, but most linguists seem to lean toward the Spanish word chanada, a word meaning trick or deceit.

Speaking of mixed, the word for the mixed drink, martini (born in 1886) may or may not have been born in California. Though some etymologists argue that martini comes from a popular manufacturer of vermouth, Martini & Rossi, others insist the drink was first mixed in Martinez, California, & was named after the town.

In 1964 the Californian word skateboard appeared. The practice of attaching roller-skate wheels to a piece of wood started in Southern California in 1963. By the summer of 1964 skateboarding was popular all over the country.

If you have anything to say about these pesky Californians messing with our language, please leave a comment.

Big thanks to this week’s sources: Etymonline, Wordnik, Merriam Webster, & the OED.
Posted by CS Perryess at 7:56 PM 6 comments:

Often, the similarities in related words are obvious. Not so with the etymological descendants of the Proto-Indo-European word deik-.

Deik-‘s original meaning was to show or pronounce solemnly. A secondary meaning had to do with the directing of words or objects.

One of the descendants of deik- made its way to Greek to become diskos, meaning disk, platter, or quoit (a quoit is a ring of rope or iron thrown toward a peg in a game much like horseshoes). Diskos moved from Greek into Latin in the form of discus, where it meant disc or quoit. By the 1660s it made its way to English (spelled disc or disk) to mean round, flat surface, & picked up the meaning phonograph record in 1888, computer information storage device in 1947 (who knew?) & the usage disk drive in 1952.

Deik-‘s time in Greek also gave birth to the form dicare, to proclaim or dedicate. It then traveled through Latin to become dicere, to speak, tell or say, & showed up in English in the 1540s as diction, meaning a word. By the 1580s diction meant expression in words & by the 1700s it also meant choice of words & phrases.1748 brought the meaning speech or oratory. And in this same etymological strain in 1526 the word dictionary was born, meaning a repertory of phrases or words.

When the Germans (or Proto-Germans to be exact) got hold of deik-, it became taiknam, show explain or teach, which made its way into Old English as tacen, meaning sign, symbol or evidence, & then became our modern word token. This same Proto-German>German strain of deik- turned into the word teach. Its Old English form was tæcan, to train, warn, persuade, or give instruction.

Though etymologists don’t connect the word dactyl with deik-, it appears that deik may have also referred to fingers (probably due to its meaning show). Deik definitely referred to toes, even though few folks use their toes to show things. The toe strand of the family tree came through Proto-Germanic as taiwho, then into Old English as toe. Interestingly, the plural of toe was originally tan.

I hope all that inspires you to leave a comment.

Big thanks to this week’s sources: Etymonline, Wordnik, Merriam Webster, & the OED.
Posted by CS Perryess at 7:31 PM 5 comments: 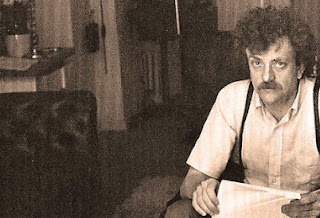 November 11, 1922 brought the unsuspecting world Kurt Vonnegut. He didn’t have much to say initially, but as time progressed he proved to be a brilliant author, thinker, & master of satire, dark humor, & pointed social commentary. This November 11 would be his 93rd birthday. I’d like to celebrate with a tiny slice of what he had to say.
True terror is to wake up one morning and discover that your high school class is running the country.
Be careful what you pretend to be because you are what you pretend to be.
I want to stand as close to the edge as I can without going over. Out on the edge you see all kinds of things you can’t see from the center.
Here we are, trapped in the amber of the moment. There is no why.

I want to congratulate librarians, not famous for their physical strength or their powerful political connections or their great wealth, who, all over this country, have staunchly resisted anti-democratic bullies who have tried to remove certain books from their shelves, and have refused to reveal to thought police the names of persons who have checked out those titles. So the America I loved still exists, if not in the White House or the Supreme Court or the Senate or the House of Representatives or the media. The America I love still exists at the front desks of our public libraries.
Make love when you can. It’s good for you.

The universe is a big place, perhaps the biggest.

Oh, and then there’s Slaughterhouse-Five, Welcome to the Monkey House, Cat’s Cradle, Breakfast of Champions, Player Piano, A Man Without a Country, & a stunning & steaming heap of essays, articles, short stories and novels.

Have a favorite Vonnegut work or quote? Please leave it in the comments section.