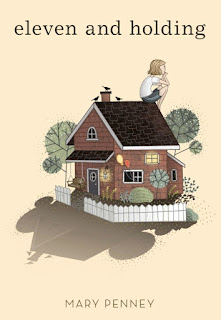 I just read Mary Penney’s new & exciting middle grade novel, Eleven and Holding. For more than one reason, it got me thinking about benevolence. It wouldn’t be fair to say the book is about benevolence, but it features some secondary characters whose benevolence truly shines.

As does the author’s.

Mary is one of those quiet people out in the world doing good things. She doesn’t need people to know she’s doing good, she just does it.

Mary would like to grow up to be a philanthropist (insert laughter from anyone with intimate knowledge of a children’s author’s salary here). She makes the point that if one has goals, one needs to practice. And how does an up-and-coming philanthropist with a small income practice? By giving in small bits. So Mary gives. In everyday little ways, in offering conference scholarships to authors, in helping veterans, in sprinkling kindness here & there, & in writing books that offer hope & bring smiles to kids’ faces.

Mary is a poster-child for benevolence, a word which appeared in English in 1400, through Old French from the Latin word benevolentia. The bene- part of the word means good or well, while the –volentia means to wish. A person who is benevolent is spending his/her time & thoughts wishing others well.

If you’ve been watching or reading a lot of news these days, you could probably use a reminder that benevolence happens. You’d probably benefit from spending time with good people wishing others well, perhaps giving in small bits. If so, you might want to read Mary Penney’s middle grade novel, Eleven and Holding (HarperCollins, 2016).

And if you’ve got a bit of time, how about clicking on comments below & recounting a benevolent act you recently encountered?

Big thanks to this week’s sources: Etymonline, Wordnik, Collins Dictionary, Merriam-Webster, & the OED.
Posted by CS Perryess at 9:54 AM 6 comments:

Over the course of the years there’s been a lot of chilling going on.

The word chill came from the Old English word ciele, which meant cold, coolness, frost, or to freeze. Ciele’s source was the Proto-Indo-European word gel-, which gave birth to heaps of modern English words.

Given what liquids do when they cool down, it’s not much of a stretch to see how a word meaning to freeze could be the parent of gel, gelatin & Jello. Gelatin, meaning a clear, jelly-like substance, appeared in 1713 after spending a couple of centuries in France as gélatine. Gel, an abbreviated form of gelatin showed up in English in 1899, meaning a semi-solid substance. Jelly’s parent-word also spent some time in France (as gelee) before moving across the channel to, well, jell into the word we know. And in 1900 the Genesee Pure Food Company started selling a product called Jello.

A Latin step-child of gel- also made its way into France, then to England in 1650 as glacial. And by 1744 the noun glacier was born.

And what happened to gel- on its way through German and Old English? tIt became both cool & cold.

Because water expands upon freezing, gel- is the parent-word for gelb-, to swell, & because a cow swells prior to giving birth, gelb- is the parent-word of calf. If you, like me, consider yourself a junior etymologist, here’s some 180-degree irony. The term calving of a glacier came from the above word-child meaning to swell, while that sense of the word came from the previous one meaning cold.

As much of the nation is swept up in a heat wave, I’m hoping most of you are getting the occasional chance to chill. I also hope you’ll find a minute to comment on all this chilling in the comments section.

Big thanks to this week’s sources: Etymonline, Wordnik, Collins Dictionary, Merriam-Webster, & the OED.
Posted by CS Perryess at 5:50 PM 2 comments:

The idiom start from scratch first appeared in 1918. Though we use the idiom today to refer to food preparation or a rags-to-riches life, start from scratch came from the world of sport. In a race, a starting line was scratched into the soil. A competitor starting the race with no handicap started on that line, from scratch.

Another scratch “we” started with is gerbh-, a Proto-Indo-European root meaning to claw or scratch.

Back in the day, gerbh- was employed when people wrote or drew by scratching on clay tablets. Eventually, this gave birth to the Greek word graphein, to write. We see graphein today in tons of words: graph, photograph, biography, graffiti, & on & on. After a century or three, we graduated from scratching things into clay & wrote or drew using the graphite in pencils.

And artful scratching (originally on those same clay tablets) gave us the word carve.

And gerbh- was also applied to the walking motion of some crustaceans, giving us crawdad, crab, & crayfish. Their method of locomotion, to claw one’s way, became the word crawl. And the word scrawl, to write untidily, may have also come from that idea of scratching provided by gerbh-.

Even telegram, monogram & hologram can be traced back to this idea of scratching & the root gerbh-. And because folks creating rules & such had to scratch them out in writing, we have grammar. Even more unlikely, because magical spells had to be written out, even the word glamour comes from this root.

In the history of language, there’s a lot of scratching going on. I’m hoping you might comment on it all in the comments section.

Big thanks to this week’s sources: Etymonline, Wordnik, Collins Dictionary, Merriam-Webster, & the OED.
Posted by CS Perryess at 9:07 AM 4 comments:

In last week’s post we looked at words like shenanigans, meaning up to no good. This week’s words chronicle shenanigans of a kinder & goofier nature.

The word tomfoolery, meaning foolish trifling, appeared in English in 1812. It came from the 1640s noun tom-fool, which meant a buffoon or clown.

Since the 1580s, English speakers have been using the word frolic, originally meaning making merry. The verb frolic came from an older adjective meaning joyous or full of mirth, also spelled frolic, which comes from a Proto-Indo-European word meaning to hop.

Also in the 1580s the noun horseplay was born, meaning overly rough play. The term doesn’t actually refer to creatures of the equine variety, but refers instead a secondary meaning of horse, strong or coarse. Horseplay gave birth to a related term in 1793, horsing (to play excessive jokes on), and another, horsing around (to join in boisterous play), in 1928.

In the 1590s the verb caper was born. It originally meant a playful leap or jump. By 1600, one could cut capers, or dance in a frolicsome manner. Caper added the meaning prank in 1840 & the meaning crime in 1926. It appears caper came to English from the Italian word capriolare, to jump in the air.

Another way to say prank or caper is the American-born noun, dido. It generally appears in the idiom to cut didoes.

In 1709 the verb romp, meaning to play, sport or frolic appeared. By 1734 the noun romp showed up, meaning piece of lively play. In 1909 romp transformed to a word meaning small children’s overalls – rompers. And those readers of a particular age will recall the children’s TV show, Romper Room, which first aired in 1953.

I’m hoping you’ve got something to say in the comments section about this etymological romp.

Big thanks to this week’s sources: Etymonline, Wordnik, Collins Dictionary, Merriam-Webster, & the OED.
Posted by CS Perryess at 10:40 AM 4 comments:

We English speakers have lots of ways to suggest someone is up to no good. This week we’ll cover a few of them.

Another word referring to a rogue’s deeds or actions is knavery, a noun that appeared in the 1580s based on the much older word knave. Knave’s root, from Old English, is the noun cnafa, originally meaning a boy or male servant. By 1200, though, knave/cnafa picked up the negative connotation, rogue or rascal. The word knavery was born of that connotation.

Knavery, shenanigans & hanky-panky can also be referred to with the somewhat less loaded word, antics, which came to English in 1520 & meant grotesque or comical gesture. Its root is the word antico, which originally referred to ancient, unearthed Roman murals, seen to be strange & bizarre, thus labeled antico, a word which has since morphed to mean antique.

The 1809 verb skylark means to frolic or play. The word skylarking was originally used to refer to the antics of exuberant sailors playing in the rigging.

And the idiom monkey business was born in 1883 to refer to questionable shenanigans. Monkey business may reflect the word monkey’s history, as monkey came through Old French from the Arabic word maimun, which meant both monkey & auspicious; the sighting of an ape was perceived to be unlucky – almost as unlucky as being the victim of monkey business.

So, good readers, what do you have to say about these etymological shenanigans?

Big thanks to this week’s sources: Etymonline, Wordnik, Collins Dictionary, Merriam-Webster, & the OED.
Posted by CS Perryess at 9:08 AM 4 comments: