Recently, yoga has become a fascination for many and a way of life for some, while others find the whole idea unthinkable. Whatever your opinion about yoga, I’m hoping you’ll find its etymology as appealing as I do.

Yoga first came to English in 1820 through Hindi from a Sanskrit word meaning union or yoking. That Sanskrit word came from the Proto-Indo-European word *yeugh-, which meant, to join. It takes no imagination to see how the ideas of union, wholeness & joining could come to mean yoga, but what I find truly fascinating is all the other words that proposed root word *yeugh- has grown into.

It gave us subjugate, conjugate & conjugal.

And how about yoke, zygote, jostle, joust, jugular & junta?

Thanks to all of you who contacted me through the blog and through other means to express condolences for the loss of my friend Paul Fahey, subject of last week’s post. Rest assured, Paul was & continues to be well loved.

And please leave any comments about yoga and its many family-members in the comments section.

Big thanks to this week’s sources: the OED, Etymonline, Collins Dictionary, Merriam Webster, Allfreedownloads & Wordnik.
Posted by CS Perryess at 9:32 AM 4 comments:

Often, we crazy humans don’t acknowledge the wonders of those around us until they pass away. Since my friend Paul just passed away, I suppose I’m doing that right here. Still, I’m confident in saying that people have been appreciating the wonders of Paul for decades. 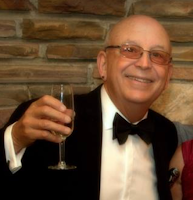 This week’s post will consider the etymologies of some of the words people have been describing Paul with for years.

Supportive appeared in the 1590s from the verb support through Old French from a Latin word meaning to convey, carry or bring up.

Talented showed up in English in the 1630s. It came from the word talent, which has been around since the 1200s, meaning inclination, will, or desire. It came from Greek through Latin & Old French, & originally meant a balance, a pair of scales, or anything of weight.

Encouraging came to English in the 1400s from the word courage, which was born of an Old French word meaning innermost feelings, heart.

Gracious made its way to English in the 1300s from a Proto-Indo-European root meaning to favor. One of gracious’s English meanings is merciful & benevolent.

Kind made its way to us through Proto-Germanic & Old English. When the word kind appeared in Modern English in the 1400s,  it meant benign, compassionate, loving, full of tenderness.

One of the conversations Paul & I regularly shared over the years had to do with the word mensch, a person of strength & honor. We share(d) the goal of working toward what we called menschhood. Mensch came to English in 1907 through Yiddish from a German word meaning human. Mensch’s Proto-Indo-European root was *manna-, which isn’t related to manna from heaven, but I would submit that having a mensch in one’s life, like having Paul Fahey in one’s life, is indeed, manna. I miss him.

Here at Wordmonger I’ve had a fine time celebrating dog idioms, dish idioms, walking idioms, skin idioms, & idioms made from the words in the title of John Green’s novel, The Fault in Our Stars. This week it’s time for idioms based around the word fish, a word that takes up nearly three full pages of the Oxford English Dictionary.

Though Chaucer included the term “a fish that is waterless” in Canterbury Tales in the late 1300s, the first time the term a fish out of water appeared in print seems to be three centuries later. You might say it’s the rare bird who enjoys feeling like a fish out of water, though I have appreciated that situation many times – a year in American Samoa as one of the few palagi on the island, a couple of years as the only Anglo in the Cal State Northridge Pan African Studies Gospel Choir, the list goes on…

There is, of course, the possibility that the fish in the water think of the fish out of water as queer fish, a British idiom that appeared in 1919, applied to anyone who might appear odd or eccentric.

Etymologists argue about the origins of fine kettle of fish (& its sibling, pretty kettle of fish). Some are moderately certain the idiom was born of a Scottish term kettle of fish, which referred to a picnic of sorts, in which the local landholder invited his minions to enjoy a day off work. This event called for the minions to light a fire on the riverbank, suspend a giant kettle over it, catch fresh fish, cook them in the kettle, and serve them to the visiting nobles. No one is certain how the theoretically positive experience could have collected a negative connotation, but I do wonder about those “lucky” minions who were invited to do all the work. Other etymologists suggest a pretty kettle of fish may have originated as a pretty kiddle of fish. Kiddle was a word used to refer to nets thrown across a river to catch the fish. Perhaps when the catch was particularly successful (or pretty), hauling in a bunch of flapping, unhappy fish made a bit of a mess? The jury is out & sparring etymologists continue to duke it out.

In 1660, John Evelyn first penned the idiom bigger fish to fry, which may be the sort of thing that leads a big fish in a small pond to venture into the larger sea, where he may feel like a queer fish, or a fish out of water, or might discover that life out of his little pond is a pretty kettle of fish.

What other fish idioms can you add to the list? Please leave a comment suggesting an idiom or two.

Given our propensity for redundancy, we English speakers have a surprisingly limited number of words to refer to the belly.

The word stomach came to English in the late 1300s from Greek through Latin & Old French. It originally held multiple meanings. 1: the gullet, throat or belly, 2: inclination, taste or liking, & 3: dislike or distaste. Because at the time many believed pride to reside in the belly, stomach also operated as a synonym for the word pride.

As of 1867, English speakers could refer to the stomach with the word tummy, which modern dictionaries label as an infantile synonym for stomach. The less formal dictionaries use the descriptor baby-talk.

Gut came to Old English from Proto-Indo-European. Most Germanic languages still have some variation of gut. Closely related to the word gutter, gut initially meant channel, a meaning which was soon applied to biological channels and came to mean entrails or bowels. In the 1300s gut picked up the verb meaning entrail-removal & another noun meaning stomach. It wasn’t until 1918 that the idiom to hate someone’s guts was born.

The no-longer-in-vogue word paunch came to us from Latin through Old French from a word meaning stomach or swelling.

And belly came from a Germanic word meaning belly or pouch. Its Germanic-language sisters have similar meanings including bag, husk, bellows, pod, billow, purse, pod, & wineskin. All these words come from a Proto-Indo-European verb meaning to blow or swell. And the idiom belly up to the bar appeared sometime in the 1930s.

Here’s hoping you successfully stomached all that. Anything to say about it? Please use the comments section.

My thanks go out to this week’s sources Etymonline, Collins Dictionary, Phrases.org, Merriam Webster, Wordnik, & the OED.