Some people can’t sleep because of partying neighbors, indigestion, climate change, or national news. Others lie awake at night wondering how the word parabolic could possibly be related to the word parable. In case you fall in the latter category, here’s the answer…

Parable, parabolic, parabola & parley all come from a Greek word constructed of para- (alongside) & -bole (a throwing, casting, beam, or ray).

The original term literally meant a throwing beside, but parable’s primary application was its figurative meaning, a comparison. The word maintained that figurative meaning in Medieval times, when used in Late Latin to refer  to stories told to make a point, parables that compared a fictional tale to real life with the purpose of teaching a lesson. After Medieval times, much study turned to science, & the word picked up its mathematical meaning. 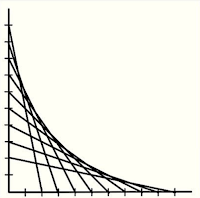 Here we have a parabolic curve or parabola — still a comparison, not really a curve, but a collection of intersecting straight lines that appears to be a curve.

As to the word parley, it grew from the earlier meaning, as most parables weren’t written, but spoken, so parley means to speak, talk, or confer.

If anything about this Parable of the Parabolic Parley seems remarkable to you, please offer your remark in the comments section.

My thanks go out to this week’s sources, Merriam Webster, Collins Dictionary,  Etymonline,  & Wordnik.

You may be wondering what a wellerism is. Here’s an overused, but classic example.

A wellerism is a well-known (or sometimes not-so-well known) interjection or statement, followed by a facetious or witty phrase. Here are a few more.

"I hope I made myself clear," said the water as it passed through the filter.

“If the tongue were not in me,” says the head, “I would not have been cut off.”

"Remarkable," said the teacher, trying out her new dry-erase board.

"So far, so good," said the escapee as he looked back at the prison in the distance.

"It's all coming back to me now," Salvador remarked after spitting into the wind.

"My business is looking good," said the model.

"We'd better rehearse this," said the undertaker after the coffin had fallen out of the vehicle.

Though he’s not responsible for wellerisms themselves, Charles Dickens is responsible for creating a character after whom we name wellerisms. Sam Weller, in Dickens’s novel, The Pickwick Papers, regularly spoke in this fashion, thus the word, wellerism. We’ll end with an example straight from the mouth of Sam:

“Sorry to do anythin' as may cause an interruption to such wery pleasant proceedin’s," as the king said wen he dissolved the parliament.

I’d love to know which wellerisms you haven’t previously heard, or which ones took a little thinking to make sense of. Please share your thoughts in the comments section.

My thanks go out to this week’s sources, Sleuthsayers, Charles Dickens Page, The Island English Tutor, & Wordnik.

The word snout doesn’t strike me as a likely parent of many words. Wrong again. 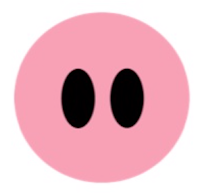 Snout showed up from early Germanic sources in English in the early 1200s, meaning trunk or projecting nose of an animal.

The Scottish version of snout is snoot. It made its way back to English in 1861, meaning nose.

Snore & snort appeared in the 1300s & 1400s respectively. Etymologists cite these words as coming from snout, but also as imitative words of the sounds they represent.

In Old English, the word snafl was born of snout. It meant nasal mucus. In time, snafl became snyflan, which gave us both sniffle and snivel.

Another snout-born Old English word referring to nasal mucus was gesnot, which by the late 1300s, morphed into our modern word snot.

In German, the mother-word for snout gave birth to a word for snarl, which got applied to a breed of dog, & made its way into English in 1923 as the word schnauzer.

All from snout — who knew?

Please leave any snout-oriented thoughts in the comments section.

My thanks go out to this week’s sources, Etymonline.com, Wordnik, Merriam-Webster, Collins Dictionary, & the OED.
Posted by CS Perryess at 10:56 AM 8 comments:

Once upon a time (or so linguists believe) there was the word *wi-ro-. It meant man in Proto-Indo-European. Over the years it’s given birth to a disparate batch of word-children.

One of those words is the noun virtue, which appeared in English about 1200, meaning moral excellence. It came from a Latin word meaning courage, manliness, high character. The following century saw the beginnings of the related word virtuous, meaning characterized by vigor, strength, or valiance. It took two hundred years for virtuous to mean having peerless moral qualities. And by 1610 another word was born into this family of words through Italian: virtuoso, originally meaning scholar or connoisseur, & shifting by 1743 to mean one with peerless artistic skill or talent.

Two *wi-ro-born words many of us hope are being re-conceptualized in this MeToo era are virile & virility, meaning manly & manly strength respectively. Virile & virility showed up in the 1400s & 1500s through Latin & Middle French.

When *wi-ro- made its way into Germanic languages, one branch of its meaning became generalized to the human race, human existence, or the affairs of life & became the Old English word world. After a few hundred years of wallowing about in the minds & usage of Old English speakers, it oozed through meanings like the world of humans, the physical world (as opposed to the spiritual world), & morphed its way into its many modern meanings, one of which is the earth.

Another branch of this word continued to mean man in Old English. When Old English speakers added their version of *wi-ro- (man) to their word wulf (wolf) they came up with werewolf.

Here’s hoping in the next few centuries as these words grow & adopt new meanings, they’ll encourage a bit more virtue, & virtuosity among all humanity & add some gentler, more flexible understandings to what it is to be a man — or for that matter, a human.

Thoughts? Please sling them into the comments section.

My thanks go out to this week’s sources, Etymonline.com, Wordnik, Merriam-Webster, Collins Dictionary, & the OED.
Posted by CS Perryess at 6:44 PM 2 comments:

Let’s start out the year with some interjections, because sometimes you just have to interject.

Yippee showed up in 1920, an expression of exultation. It may have come from hip (as in hip hip hooray).

Dern (1830) & durn (1835) are American attempts to avoid the “swear word” darn, which was a 1781 American attempt to avoid the “swear word” damn. In popular usage, they all are an expression of anger, irritation, or contempt. Linguists believe darn may be an abbreviation of eternal damnation (mispronounced ‘tarnal damnation). If so, it’s related to the 1784 American interjection tarnation.

Wow showed up from Scotland in 1510, & continues to express a state of delight or amazement. Its source is unclear.

Ahem appeared in 1763, a lengthened version of the earlier hem, imitative of clearing of the throat. Ahem continues to be an expression of disapproval, embarrassment or an attempt to get others’ attention.

Oh is a one-interjection-fits-all-emotions sort of interjection from the 1530s. Existing in many Indo-European languages, oh can be used to express nearly any emotion. This interjection gave birth to oh boy  in 1910, oh baby in 1918, & oh yeah in 1924.

Hey has been part of the language since 1200. Like oh, hey has many meanings. Some include an expression of derision, challenge, greeting, pleasure, surprise, warning, & anger.

Mercy has been around as an English interjection since 1300. Though it originally was a shortening of may God have mercy, as a modern interjection mercy can express surprise, annoyance, fear, or thankfulness.

Man has been used as an English interjection since the 1400s, originally expressing impatience, surprise, or emphasis, & today — like the much-maligned interjection dude — man can mean almost anything.

English is rife with interjections. If you’ve got a favorite “fit-to-print” interjection I missed in this very short list, please suggest it in the comments section.

My thanks go out to this week’s sources, Etymonline.com, Wordnik, Merriam-Webster, Collins Dictionary, & the OED.
Posted by CS Perryess at 10:03 AM 6 comments: