This week I stumbled upon the sort of quote that tickles the fancy of a word nerd. It comes from a 1912 article in The Nation.

“[T]here is an alarmingly wide chasm, I might almost say a vacuum, between the high-brow, who considers reading either as a trade or as a form of intellectual wrestling, and the low-brow, who is merely seeking for gross thrills. It is to be hoped that culture will soon be democratized through some less conventional system of education, giving rise to a new type that might be called the middle-brow, who will consider books as a source of intellectual enjoyment.”

The quote sparked not only a good laugh, but an interest in the origins of the word brow. It seems the Old English braew initially meant blinker or twinkle, and was used to refer to the eyelid or eyelashes. Its early relatives can be found in brus (proto-Germanic), bhrus (Sanskrit), ophris (Greek), bruvis (Lithuanian), & the Old Irish word bru.

To refer to what today is called the eyebrow, the Anglo-Saxons combined bru with a prefix meaning over, to create the term ofer-bru, but somewhere in the 1200s the prefix evaporated and the prefixless bru or brouw came to mean eyebrow. It wasn’t until the 1500s that the word brow came to be used to refer to the forehead.

The term browbeat showed up in the late 1500s, though it appears that 16th century browbeating had more to do with frowning, or lowering one’s brows than with any sort of attack.

The terms low-brow & high-brow didn’t come about until 1902, a mere decade before the coinage of that beautiful term labeling those of us who consider books “a source of intellectual enjoyment,” middle-brow.

So, fellow book-lovers, will any of you join me in proudly wearing the label, middle-brow? Please let me know. We‘ll start a movement!

My thanks go out to this week’s sources, Etymoniline.com, The Nation, & the OED.
Posted by CS Perryess at 3:35 PM 4 comments:

I wanted to call this post, “What’s good for the goose is good for the barnacle.” The title was simply too long for the blog’s title format. Such is life. 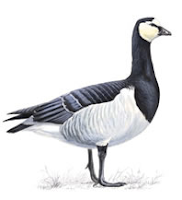 Any birders out there will know that there is a bird species that goes by the name barnacle goose. What I find linguistically fascinating about the barnacle goose is that its name is redundant. The word barnacle first appeared in English in the early 1200s, meaning a species of wild goose. It wasn’t until the 1580s that barnacle applied to a type of shellfish. Though nobody’s certain, many etymologists believe this has to do with a combination of two things: 1) the barnacle goose was never seen raising its young by Europeans, as it indulged in this process in the European-free Arctic, thus causing those curious Europeans to come up with unlikely folktales, & 2) the barnacle of the shellfish variety catches its food with feathery, downy tendrils. So obviously, those funny-looking shellfish HAD to be the eggs of the barnacle goose!

While we’re considering our friend, the goose, here are some other goosely language thoughts:

1540s – goose begins to mean a simpleton or foolish person
1845 – the idiom, to cook one’s goose is born
1866 – goose egg comes to mean the number zero
1880s – goose picks up another idiomatic meaning, a jab in the derriere

The term gander appears to have originated with the Lithuanian word, gandras, or stork, which morphed to mean single men (much like “he’s going stag”). It was probably the similar initial sound (& possibly a dearth of storks) that led gander to mean male goose. By 1886 the idiom to take a gander was born, based off the gooselike craning of one’s neck while taking a gander.

So followers, please consider yourself goosed. What have you to say about all these gooseworthy thoughts?

My thanks go out to this week’s sources, Etymoniline.com & the OED.
Posted by CS Perryess at 9:29 PM 4 comments:

As summer approaches, we’re all bound to see more skin. It’s time to celebrate the skin we’re pleased to see or expose, while simultaneously distracting ourselves from the skin we’d rather not see or expose. The English language employs a good number of idioms that include the word skin. Being a bit of a word nerd, I can hardly keep from laughing when simply reading a page in an idioms dictionary. I hope this “page” I’ve compiled spreads a bit of mirth:

Okay valiant followers who recognized every last skin idiom in the list, let me know. On the other hand, let me know if one or two caused you to think, “What the heck does that mean?”

My thanks go out to this week’s sources, Barron’s Handbook of Commonly Used American Idioms, Idiom Connection, Using English & the OED.
Posted by CS Perryess at 7:20 PM 3 comments:

We have countless authors to thank for coining some of the more colorful words in our language. This week, let’s celebrate a few.

Jonathon Swift brought us the word yahoo with the publication of Gulliver’s Travels in 1726. Yahoo referred to a race of backward, brutish people with hair on the backs of their hands. Yahoo’s subsequent metamorphosis appears to be a bit of a mystery.

Richard Brinsley Sheridan coined the term malaprop in his play, The Rivals (1775). One of his characters was inclined to abuse her metaphors, coming up with such gems as, “He’s the very pineapple of success!” Her name was, of course, Mrs. Malaprop.

Oddly enough, James Joyce brought us the word quark in Finnegan’s Wake back in 1939. Joyce gave it no particular meaning, beyond the possible meaning of cheer, in the line “…three quarks for Muster Mark,” but the sound of the word appealed to physicist & linguist Murray Gell-Mann, who applied quark to fractionally charged subatomic particles in 1964.

Dr. Seuss’s 1950 picture book If I Ran the Zoo brought us the word nerd, an odd creature one might want to put under lock and key. Here’s another word that has grown & changed since its birth. The changes don’t appear to have been tracked carefully. I guess some of us word nerds must have been snoozing.

My thanks go out to this week’s sources, Etymonline.com,  Mental Floss, Flavorwire & the OED.
Posted by CS Perryess at 8:43 PM 6 comments: