There is magic in lists, & a very particular sort of magic in lists of idioms. To celebrate that magic, here’s a list of idioms beginning with the word pull.

I hope that brought a smile. Any responses are welcome.

My thanks go out to this week’s sources: the MyEnglish Teacher, OED, TheFreeDictionary, Oxford Dictionary, & Etymonline.

The process of preening ourselves to look smart, tidy or stylish, has any number of labels. Here are a few.

Since the late 1800s we can get duded up (or dooded/doodied up if preferred). This term came about in the late 1800s from the word dude (city slicker).

The Proto-Indo European word *sleigh- meant to glide smoothly, & gave us the English word slick, which made its way across the pond to America, where one variant came to mean preening oneself to look smart, tidy or stylish — slicked up.

We can also get spruced up. This idiom seems to have been born of the fancy leather jerkins worn by Prussian soldiers back when the word spruce used to refer to Prussians.

In the early 1800s a fancily dressed individual could be referred to as a spiff, which gave birth to the late 1800s idiom spiffed up.

And since the 1940s we’ve had the term gussied up. Though nobody’s certain of its origins, it may have come from a familiar name for Augustus (Gussie),  or from the word gusset.

In the early 1800s when one tidied oneself, the verb tidivate came along (from the word tidy + verb ending -vate). It soon shifted to titivate.

So, next time you need to look fancy, what term will you use for the process of getting there?

My thanks go out to this week’s sources: the OED, Etymonline. Free Dictionary, Merriam Webster, Collins Dictionary, Oxford Dictionary, & Wordnik

Most English words have their source in Latin, Greek, or Germanic languages. But not all. Slogan is one such word. 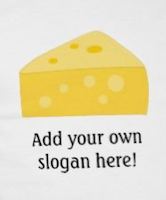 Slogan comes from the Celtic term slough gairm, which roughly translates to service cry. When it moved from Celtic into Gaelic, it became sluogh ghairm, meaning battle cry. From there, it made its way to English, first appearing as slogorne in 1510, & morphing to the spelling we know today by 1670.
By 1704 slogan meant distinctive word or phrase used by a political or business group.

So all this suggests that the modern citizen has a historical argument for feeling overwhelmed or embattled by the war cries of advertising & poltical slogans.

My thanks go out to this week’s sources: the OED, Etymonline. Merriam Webster, Collins Dictionary, & Wordnik (image from Daily Mail)

We use all sorts of words to describe writing. Here’s a look at some:

The synonyms wordy & verbose both come from the Proto-Indo-European word were- that meant, not surprisingly, word. Were- made its way through Latin (verbum) to become the English word verbose, while another branch of the were- family tree made its way through Germanic languages (Old Saxon, Frisian, Dutch and Old High German) to become word. Wordy. At some point the Scots generously donated that final –y to wordy, as they did to many English words.

A writer who is wordy might be referred to as prolix, which showed up in English in the 1400s, through Old French, originally from Latin, prolixus, where it meant extended, with a literal translation of flow forth or flowing liquid, a metaphor that works just fine for any of us who’ve spent time on the listening end of a prolix speech or lecture.

In the 1580s, concise came to the language from the Latin word concisus, meaning cut off or brief. Concise is constructed of two bits, con- or com-, meaning with, & -cise or -cide, to cut. This means the word concise translates to something like with cutting, & cutting is exactly what we have to do when our language needs to be more concise.

A synonym of concise is succinct. It’s modern meaning, brief or concise showed up in the 1500s, but its initial meaning in English was “having one’s belt fastened tightly,” & that’s exactly what those of us who tend toward wordiness feel when we’re told we need to be more succinct. The word was born of a Middle French word, which came from the Latin succinctus, which originated in a word meaning to gird from below, arguably referring to an early “support garment” – one that likely felt a bit constricting -- which at least offers imaginative evidence that it was our wordier ancestors who moved succinct into its present meaning.

Fellow writers & readers, what do you have to say about verbosity or succinctness? Do naturally tend toward one or the other? In writing? In speech?

My thanks go out to this week’s sources: the OED, Etymonline. & Wordnik